A short video clip of a wedding ceremony held in a Philippine has made the rounds in the social media and went viral, as netizens fancied the way the bride responded to the priest.

On the short video clip lasting only 27 seconds, the priest asked ‘Princess,’ the bride, if she accepts ‘Sydney’ to be his husband. Instead of answering in the usual way such as ‘I do,’ ‘yes,’ or ‘opo,’ ‘Princess’ said, ‘Uho.’

Princess response drew laughter from the crowd inside the church. Even his groom chuckled when he heard her reply.

The priest asked Princess another question. He asked the bride if she wholeheartedly gives herself to be ‘Sydney’s lawfully-wedded wife.

Once more, ‘Princess’ answered ‘Uho’ to this question. But this time, the reply was more pronounced, the even she laughed at herself. 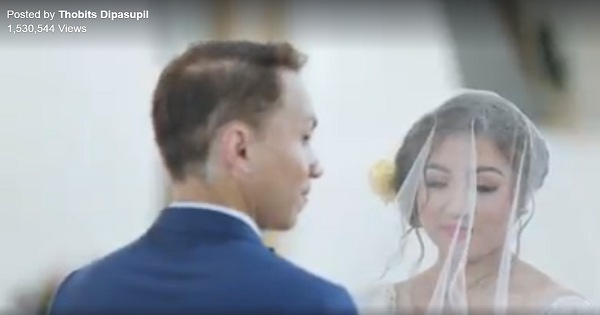 ‘Uho’ is supposed to be ‘Opo,’ an affirmative response that is uniquely used by Filipinos, as a sign of respect to elders. ‘Princess,’ apparently, responded to the priest’s question with an accent of a Batangueña. These people hail from the Southern Tagalog region of the Philippines, specifically, from Batangas province.

Batangueños are known for their rhythmic way of speaking and use of deep, uncommon, Tagalog words. Their thick accent is prevalent and distinct.

Thobits Dipasupil uploaded the said viral video on Facebook which he captioned, ‘Pag garne sagot ng babae pihong mapapa umis ka”. A typical non-Batangueño Filipino will find this caption hard to understand, as some of the words are used only in Batangas areas.

Nonetheless, the caption only says that one will get a laugh if a woman answers this way.

Some netizens find this quirky response cute and sweet. Some say that the scene in the video only shows how happy the bride is during her special day.