A church in the Philippines posted a wedding bann that quickly made waves on social media because it shows the details of an upcoming celebrity wedding, with both couples being popular names in the local showbiz! Oooops.

Most celebrities would want to keep their wedding details as hush-hush as possible, for many obvious reasons. They clearly don’t want the venue to be mobbed by fans hoping to catch a glimpse and take photos – especially if the couple are both in showbiz!

The post created quite a stir in the community, especially because no local celebrity has ever publicly announced details of their upcoming wedding, down to the exact date and exact location!

In the post, the wedding bann showed that the wedding will be held on October 23, 2021 at the Madre de Dios Chapel in Tagaytay Midlands.

But netizens found it hilarious that the bann showed what appears to be a 1×1 photo of the celebrity couple, with exact details of their real names, age, and even their respective parents’ full names! Many thought that this post is an invasion of the couple’s privacy and should be taken down.

Some netizens believe that it’s wrong for the parish to do this, particularly because the couple are celebrities. No one wants to have a crowd of fans (probably crowds of them!) at their wedding venue, especially because it’s expected that there will surely be other celebrities attending that event, too!

But Carla later clarified that she doesn’t mind the post because this is a wedding bann, an announcement that the church makes for an upcoming wedding. She explained that this is actually a requirement for all Catholics who are getting married! It’s just part of the process to obtain a wedding permit. 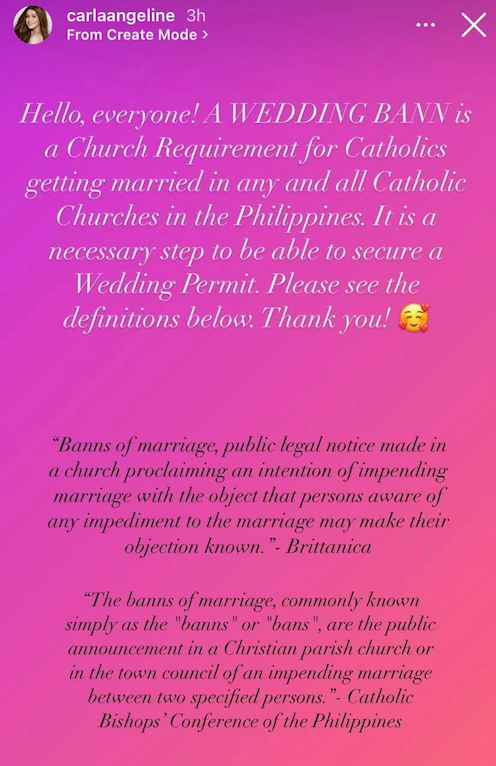 A wedding bann is a public announcement made by a parish church or town council of an upcoming marriage between two specific people.

The public announcement is usually posted for a specific number of days (such as 30 regular days or 15 working days) to allow anyone to raise concern over the possible legal problem that might cause the marriage to become invalid (such as one of the couple might already be married but hiding his/her real status).