Have you found ‘the one’ and planning to do that wedding proposal you’ve always dreamed of? Congratulations! That sounds exciting! But before you propose, it might be a good idea to recheck things you’re about to do or ask friends to do – or you might end up doing something similar to this ‘demanding’ wedding proposal that got the internet laughing.

The friends of the guy who was proposing to his girl must have been so excited about the wedding proposal, too, that they bungled the words big time!

Each of the four friends were holding a word of the classic proposal question, “Will you marry me?” However, too eager to surprise their friend’s girl, the proposal turned out to be a ‘demand’, not a question.

“You WILL marry me,” the sign read. LOL. And just in case some people don’t know the difference, here’s a little grammar lesson. 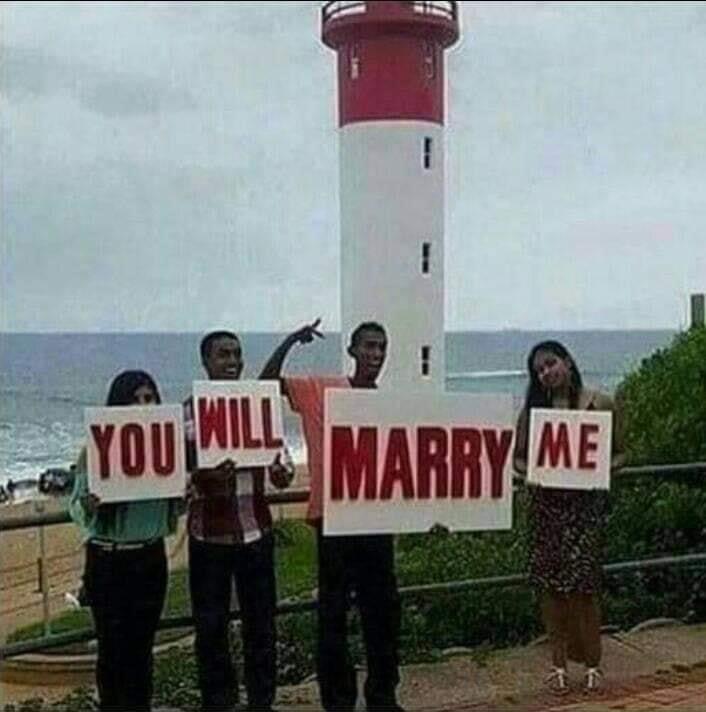 “Will you marry me?” asks the girl if she would marry the boy, but “You will marry me” tells the girl to marry the boy. It even sounds like a demand because ‘will’ is a word used to express inevitable events. Big difference, we tell you.

But to give these friends the benefit of the doubt, it might actually be possible that the guy told them to do this arrangement. If that’s the case, then all of them had no idea that they made a mistake there.

Still, it got the internet laughing and netizens were left scratching their heads in puzzlement over why not one of them figured out the right order of the words.

But if it’s any consolation to you, the girl probably didn’t mind that the words were not in proper order because if she loves the guy and is willing to marry him, “Will you marry me” and “You will marry me” would have the same effect – there’s no need to say, “Yes!” because she will definitely agree either way.

These days, a lot of guys make wild wedding proposals, with many creating dramatic scenes or doing flash mob dances. But classic proposals are still a thing.

In classic proposals, the guy kneels on one knee and extends his hand with a ring to offer the girl, popping the classic question, “Will you marry me?” It doesn’t matter if they are by themselves at a private setting or if other people are there to watch, but there’s not much fanfare.