They have been a couple for 8 years and have talked about getting married the past 3 years, but one woman was mortified to receive a ‘tiny’ engagement from her boyfriend. She was outraged that he had ‘saved up’ for the ring, only for her to receive such a tiny diamond.

Not impressed with what she received, the bride believed to be from the United Kingdom posted a photo on her ring on Reddit. She wrote on the social media site:

“We [have] been together for eight years and talking about getting married for almost three.

This is the ring he said he saved up to buy me. Am I being shady or materialistic if I tell this mf ion want this little a** ring?” 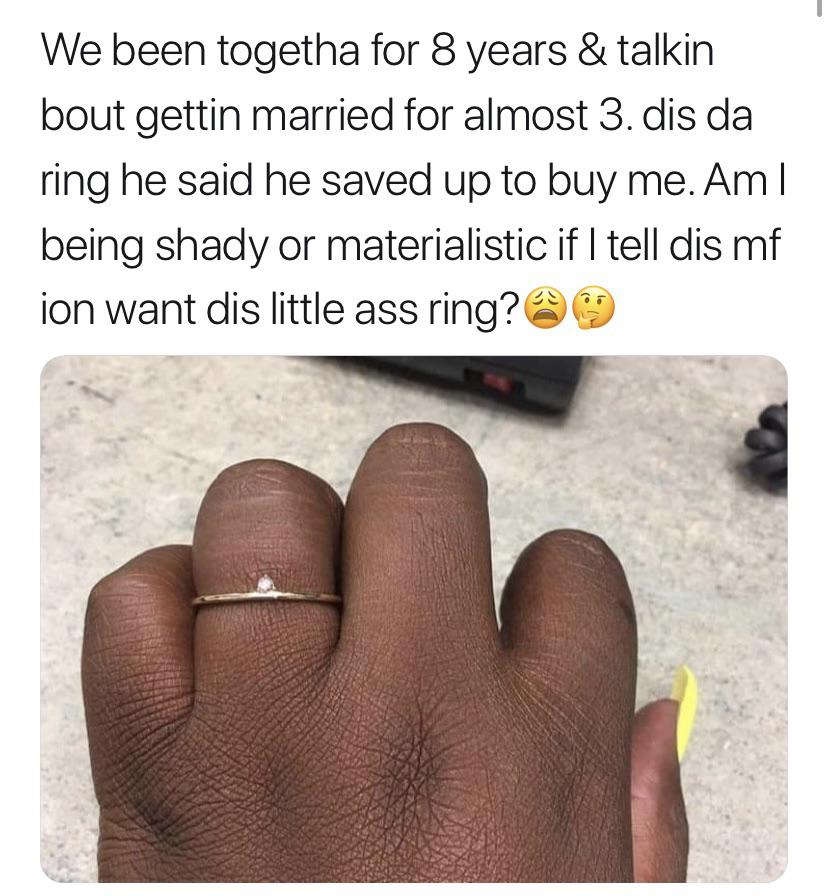 The post received mixed reactions from netizens; though most showed support for the girl as the ring does look so tiny.

“That is the saddest ring I’ve ever seen. I’m not a materialistic person, but it just doesn’t even look good. She should talk to him if she’s unhappy with it?” one user commented.

Many netizens agreed with the statement, saying that if they have been together for 8 years and she expected a better ring, she should talk to him about it. Others also pointed out that the woman did not say what her boyfriend’s job might be. Perhaps it really was the only thing he could afford even with months of ‘saving up’?

“I think I’d be more insulted to be given this ring than no ring at all. Like, just skip the ring altogether if you can’t afford it. That’s just embarrassing,” another netizen commented.

Others said that she should learn to accept her boyfriend and future husband for who he is and what he could afford. If not, then she should just call it quits. But there are those who think the minimalistic ring is alright as long her would-be husband would work hard for the family…

Most engagement rings have a gold band that features a solitary diamond but these days, guys have a lot of choices available at the jewelry shop. Finding the best engagement rings depend largely on your budget and what style the woman might like.

Contemporary styles feature different diamond cuts or have smaller diamonds and other stones set along the gold band. Platinum or white gold rings are also a trendy option.