Brides truly want to look unique and different from other brides, especially when it comes to wearing the wedding dress of their dreams! But with so many styles available in bridal shops these days, what might happen if the bride wears the same dress as the ones picked by her friends for their own wedding?

One bride got really, really angry with one of her bridesmaids for picking a dress similar to her wedding gown. This particular bride was furious because her bridesmaid will get married 3 weeks before her wedding! She appears to fear about what people would say about them having the same wedding dress; though she also noted that the dresses have different details, but both have the same style.

“One of my bridesmaids is getting married 3 weeks before me and she just picked out her dress yesterday and it’s so similar to mine!! It is the exact same style and I feel very frustrated and annoyed! Is it fair to be annoyed???” the angry bride wrote.

“We have different body types and all the details are different but they are EXACT same style! I’m on the left and hers is on the right.” 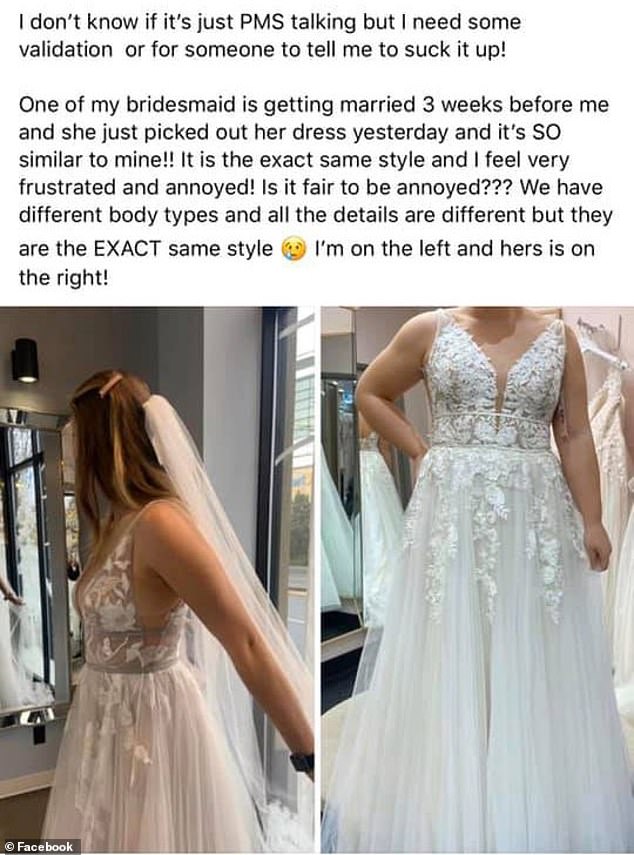 A lot of netizens disagreed with the angry bride, saying that unless they also have the exact same guest list, no one would probably notice the similarities in their wedding dresses! Plus, they would not be getting married at the same venue on the same date; thus, people are likely to forget that they have the same dress, anyway.

Other people pointed out that unless she had her dress custom-made with her own design and her bridesmaid copied the style, she had no right to be angry at the other woman’s similar choice. After all, they are friends – they certainly have a lot of things in common.

Others also think that if she’s really bothered about the dress, then she should have told her friend about it and asked the other woman to change her choice because she was the first one to pick that dress.

A bridezilla is a term for a bride who is extremely demanding and difficult to deal with. She believes she is entitled to be such a perfectionist; but shares her sentiments with friends and family in a not-so-nice manner.