Some days ago, music enthusiasts were excited to support someone on Instagram who claimed that Drake agreed to perform at his wedding this coming September 22 to surprise his sweetheart, as long as he gets 1 million likes and 100k new Instagram followers.

While many were skeptical that this could be fake, many did show their support to the guy just in case the story was for real. Many were hoping that it was true and that Drake would follow through with his promise, especially because the account would quickly surpass the 100k-follower mark and the post gained more than 1 million likes in just a few days. 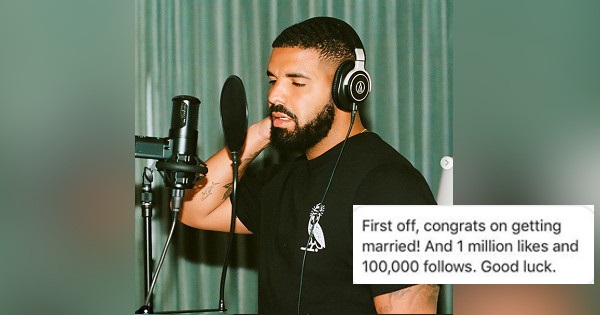 A lot of Drake fans also messaged the singer for a similar wish, hoping he would also perform at their private event in exchange for 1 million likes.

After keeping quiet for several days regarding the issue, Drake finally speaks up – and that’s after the @drake_wedding Instagram account had received more than 1 million likes on its post and over 200k followers.

In an Instagram story, Drake shared the real DMs with the fan – and he didn’t actually agree to the wedding gig. But there’s actually no wedding at all because the fan was actually a 16-year-old teen who doctored the DMs while having some fun with friends.

The 16-year-old hoaxer was identified as a certain Jacob Hawk, who claims to come from San Antonio, Texas.

“Hey Drake. Sorry it blew up like this. I’m a 16 year old from San Antonio and never meant for it to be like this. Huge fan of you,” Hawk wrote Drake.

When the singer did not reply, he added, “You can have my account if you want. I don’t know what to do.”

While Drake did not appear to reply to Hawk, he shared the DMs with the caption, “Instagram is a disturbing place.”

Hawk would later come out and reveal that the singer had blocked him on social media. He said that he was only doing it while having fun with friends and later wanting to create a fast-growing IG account he could sell to buy a car…

According to the urban dictionary, DM means ‘direct message’. It simply means that someone sends a message to another person on social media. It’s actually the same as ‘PM’ which means ‘private message’.